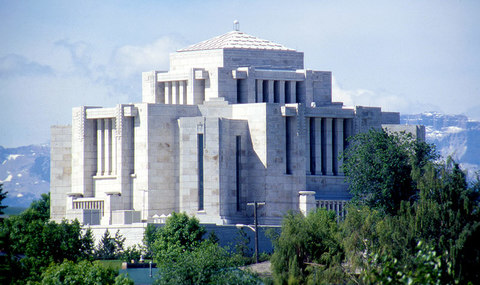 Temple Locale:
The Cardston Alberta Temple is a historic Alberta landmark that stands on elevated ground in the center of Cardston. Founded by Mormon settlers in 1887, the small community lies just 15 miles north of the U.S.-Canada border on southern Alberta's fertile plains. Outside the gates of the temple, a public visitors center (operated in the summer) offers several displays including construction photographs dating to the early 1900s.

Delayed in part by World War I, construction of the Cardston Alberta Temple lasted for 10 years. The last two years of construction were needed just to furnish the temple and prepare it for use; public tours were offered to visitors during this time.
The Cardston Alberta Temple features beautiful hand-painted murals and rare hardwoods on the walls of its its progressive-style ordinance rooms: Creation Room, Garden Room, World Room, Terrestrial Room, and Celestial Room (no murals).

The Cardston Alberta Temple is one of only seven temples where patrons progress through four ordinance rooms before passing into the Celestial Room. (The other six temples are the Manti Utah Temple, the Salt Lake Temple, the Laie Hawaii Temple, the Idaho Falls Idaho Temple, the Los Angeles California Temple, and the Nauvoo Illinois Temple.)

In 1962, an addition to the Cardston Alberta Temple was dedicated by President Hugh B. Brown, who resided in Alberta for many years after his family moved there when he was sixteen years old.
In May 1988, the Cardston Alberta Temple was closed for three years of renovation work, which included modernization of its electrical and mechanical systems, addition of an entryway to the front of the building, and complete refurbishment of its interior—done with painstaking attention to detail to keep the temple true to its original decorating and design.

On September 16, 1995, the government named the Cardston Alberta Temple a Canadian Historic Site. The commemorative plaque recognizes the temple as "the first consciously modern building in the province of Alberta."