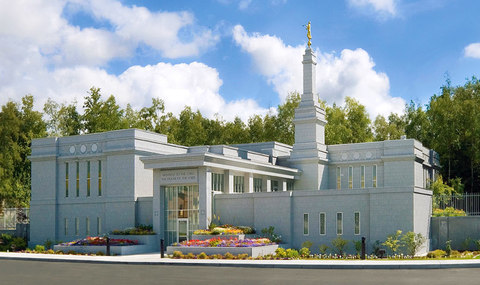 Temple Locale:
The Anchorage Alaska Temple stands just east of highly traveled Seward Highway in southern Anchorage. A beautiful grove of trees and the majestic Chugach Mountains create a stunning backdrop for this holy house. The temple is part of a complex with the Anchorage Alaska Stake Center; the two buildings share a common parking lot.

During its short 2½-day open house, the Anchorage Alaska Temple saw 14,131 visitors tour its interior prior to dedication.

President Gordon B. Hinckley dedicated the Anchorage Alaska Temple in seven sessions with 6,291 members in attendance from throughout the vast temple district.

The Anchorage Alaska Temple closed in April 2003 for a 10-month expansion project that added a second ordinance room, offices, new dressing rooms, a waiting room, laundry room, and elevator. The temple increased in size from 6,800 square feet to 11,937 square feet.

Preceding its re-dedication, the Anchorage Alaska Temple was toured by nearly 10,000 visitors, who traveled from all over the large state.
The words Holiness to the Lord—The House of the Lord are inscribed in three different locations on the Anchorage Alaska Temple: (1) on the east side of the temple on the exterior wall of the Celestial Room, (2) on the base of the spire near the original entrance to the temple, and (3) directly over the doors of the new entrance.

On, Thursday, March 22, 2007, an accidental fire erupted in the 30-year-old stake center adjacent to the Anchorage Alaska Temple, destroying most of the roof and causing extension damage; it was rebuilt over the next year. The following day, a water line burst in the temple basement, flooding it with 3–5 feet of water; the building was shortly restored to working order.

Temple History
When President Gordon B. Hinckley announced his concept of smaller temples in 1997, Anchorage topped the list of considerations for a pilot location. However, at the suggestion of architect Doug Green, Monticello, Utah, was selected for the prototype because of its location near Church Headquarters. From what was learned during construction, Brother Green was able to implement nearly 300 improvements and modifications to the Anchorage temple blueprints that included innovations such as heated stairs and an entrance canopy.1
Just five years after its dedication, the Anchorage Alaska Temple was rededicated after an expansion project that nearly doubled the building's square footage. The renovation included the addition of a second ordinance room, offices for temple staff, new men's and women's dressing rooms, a patron waiting room, a laundry facility, and an elevator.2