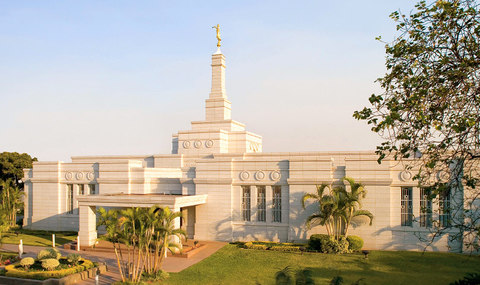 Temple Facts:
The Asunción Paraguay Temple was the first temple build in Paraguay.

Groundbreaking Ceremony:
Faithful Paraguayan members met together under the clouds of a downpour for the groundbreaking ceremony of the Asunción Paraguay Temple. During the ceremony, the vice chairman of the Asunción Paraguay Temple construction committee, Carlos Roig, stirred to remembrance the delight felt by local members when they received the announcement made during the April 2000 General Conference that plans were underway for building the first temple in Paraguay. Brother Roig paralleled their reaction to the saints mentioned in Mosiah 18:11 who received happy news with great joy. "[We] also responded with joy, tears and appreciation because a temple would soon be built here," he said.1
Elder Jay E. Jensen of the Seventy and president of the South America South Area who presided at the groundbreaking, offered the dedicatory prayer giving thanks that the people of this nation would soon receive the fulness of priesthood blessings and ordinances in their own country. He also gave thanks for those persons whose lives would be touched and forever changed by coming to a knowledge of the restored gospel because of the future temple. He expressed desire that the members would dutifully pay their tithes, thus enabling them to receive temple recommends.2