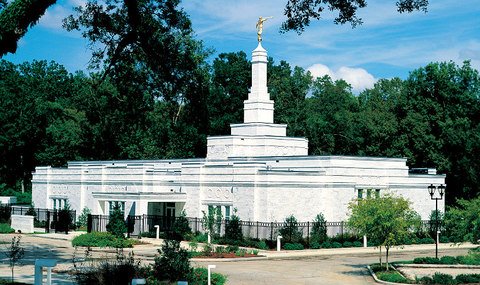 Groundbreaking Ceremony:
Elder Monte J. Brough of the Seventy and president of the North America Southeast Area presided at the groundbreaking ceremony for the Baton Rouge Louisiana Temple. During his remarks, Elder Brough said that the greatest revelation of the latter days was Joseph Smith's first vision. "This experience allowed Joseph to have actual knowledge of the Father and the Son," he said. Elder Brough further explained that all men must come to know the only true God and His Son Jesus Christ. That is the purpose of temples, he affirmed. "It is a process whereby we come to know Jesus Christ because we act as saviors, in a modest sense, to bring to those who have not had a chance across this earth and those who lived prior to our time the opportunity to hear the gospel, to accept the gospel and to be members of Heavenly Father's Church."1

Elder Brough also spoke of the revelation on September 21, 1823, when the Angel Moroni appeared to Joseph Smith and quoted Malachi: "The hearts of the children shall turn to their fathers." Elder Brough indicated that the dramatically increased interest in family history research, rapidly changing technology and dozens of temples currently being constructed across the earth are fulfilment of Malachi's prophecy. "Last year, " he said, "the Family History Department filmed in many different countries, gathering millions of names. At current rates, we have collected enough names to keep the temples busy for a long time," he said. "We really have no excuse."2