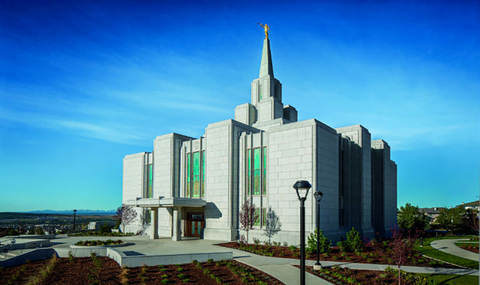 Angel Moroni Raising:
On January 12, 2012, hundreds of Calgary members gathered to the Royal Oak Chapel on a dark, wintery morning to witness the raising of the angel Moroni statue atop the Calgary Alberta Temple. A palatable excitement was in the air as hot chocolate was served from pickup trucks, media teams conducted interviews in the parking lot, seminary students—dressed in funky pajamas and wrapped in blankets—burst into The Spirit of God, and neighbors stood on second-story decks snapping photographs and watching the proceedings. The spire and statue assembly, put together the evening before, was hoisted into the air at 9:05 a.m. and was being bolted into place by 9:20 a.m.1

Groundbreaking Ceremony:
Ground was broken for the Calgary Alberta Temple on Saturday, May 15, 2010, to an audience of about 1,600 Church members, priesthood leaders, civic leaders, government representatives, and cabinet ministers in an inspiring ceremony presided by Elder Donald L. Hallstrom of the Presidency of the Seventy. Elder William R. Walker, Executive Director of the Temple Department, conducted the ceremony. And Elder Richard K. Melchin, the Area Seventy who has played a key role in the events leading to the construction of the temple at this location, was also in attendance.

Construction Approval:
On Friday, August 7, 2009, Abbarch Architecture applied for a land use amendment with the City of Calgary to accommodate a "Place of Worship" at 81 Royal Elm Dr NW.3 The application was reviewed by various City departments and officials before a recommendation was made to the Calgary Planning Commission.

On Thursday, November 26, 2009, the Calgary Planning Commission considered the request for redesignation of the temple site from Direct Control District to Special Purpose—Community Institution District, which would permit the proposed height of the temple and its steeple. The original bylaw already allowed for two comprehensively designed places of worship on site but at a height that accommodated the meetinghouse only, as the temple had not yet been designed. The Commission recommended adoption of the new bylaw, but it also recommended that the City Council consider an alternative: amend the bylaw to Direct Control District based on S-CI District, which would allow restrictions and specifications to be written into the law that addressed community concerns.4 The suggestion proved to be an effective compromise, which met the needs of the Church while addressing the concerns of neighbors, namely, concern over the possibility of a loop hole on height restrictions and difficulty in challenging an access issue, as expressed by the Chair of the Rocky Ridge Royal Oak Community Association. The Association did not oppose the building and steeple height as proposed.5

On Monday, February 8, 2010, the Calgary City Council approval the amended version of the bylaw, which permitted the height and design of the temple while adding provisions that limited the number of places of worship on site to two (the temple and meetinghouse), established specific building and steeple heights for both places of worship, and restricted access to the site to three specific turn lanes. A report was distributed to the City Council that included several renderings of the temple and site plans.6

Temple Site:
As described by Elder Richard K. Melchin, Area Seventy in the North America Central Area, the temple site is a "beautiful site with a panoramic view of the city." Located next to the Royal Oak Chapel in northwest Calgary, the site was purchased about four years prior to the temple announcement. Over 18,000 members live in Calgary organized into six stakes.7

Access to the temple will be greatly facilitated by the Tuscany C-Train station. C-Train is Calgary's light rail transit (LRT), which provides public transportation to various sections of the city. The Tuscany station will be located within short walking distance of the temple at the intersection of Crowchild Trail and Rocky Ridge Road, which borders the temple site to the west. The station was originally planned to be completed after 2023, but on November 7, 2007, the Calgary City Council approved and funded completion of the station by 2011—about a year before completion of the temple.8
The Calgary Ring Road—a beltway project that is surrounding Calgary with a high-capacity freeway—will also improve access to the temple. The Stoney Trail/Crowchild Trail Interchange, just a couple of blocks from the temple site, is planned to be completed in the fall of 2011.9

Mormons first began to settle in southern Alberta in the 1880s as contract workers on the St. Mary's Irrigation Canal and as farmers in present-day Cardston. By 1895, the first stake in Alberta was established, and membership in the Church has continued to thrive ever since. Today there are over 75,000 members throughout the province.11